Just bought rodeo tickets. Where do I send the bill?

The meter is running, and I’m growing less interested by the minute.

A popular equestrian expo has graciously offered me a media pass again this year, which saves me about $30 for three-day admission. Let’s not talk about the travel, lodging, and other expenses.

Today, at the urging of a bunch of equestrian friends, I jumped on the computer to order tickets to the evening rodeo at this event. (The rodeo tickets are not included in the media pass.) 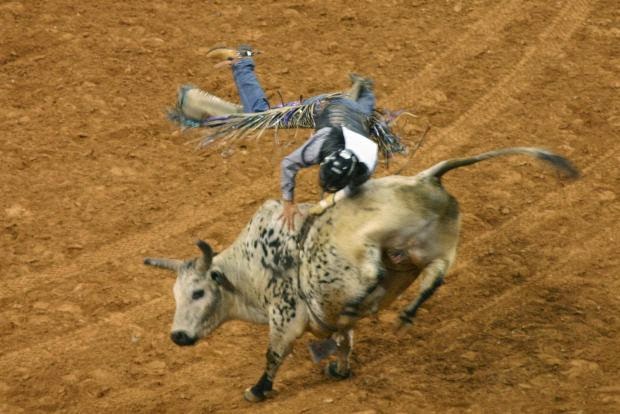 (Never mind that I’ve written HUNDREDS of articles about this expo in the past few years. I've even published stories about the rodeo.)

Although I’m not a huge rodeo fan (and that’s another story altogether), I do enjoy the horses and the specialty acts that are often part of the show.

(Never mind that I’ve seen the very same rodeo about a dozen times for the price of a county fair admission, ranging from $7 to $10.)

This particular rodeo will probably include a tribute to its late founder, Bob Barnes, whom I met several times and personally enjoyed as a fellow horse lover. It’s also likely to feature a few bonus equestrian performances.

The rodeo tickets are priced at $20. (Nosebleed seats are a bit less. Kleenex, of course, is extra.)

The event organizers, who used to sell the rodeo tickets through their own website, now offer them only through Ticketron.

Honestly, I am not exactly giddy about this whole process.

Although I am excited to gather with my friends in a few weeks and enjoy a night out at a horse-themed event, I’m madder than a bull in a rodeo chute at what it took to get there.

All told, I spent half an hour, just trying to order tickets to attend the rodeo at an event I am already covering. Wish I could apply my billable rate for the ordering ordeal.

Selling tack online or in tack sales? Which is better?


Tack sale season is here. It seems as if everyone's talking about tack these days - at least, in the horse world.
Equestrians are cleaning out tack trunks and closets, sorting and selling all sorts of horsey items, while shopping for bargains on others. Lots of horse lovers are posting equipment, horse show clothes, and miscellaneous horse-related items on eBay, in Facebook groups, and all over the internet.

Which is the better way to sell used horse tack and equestrian apparel? 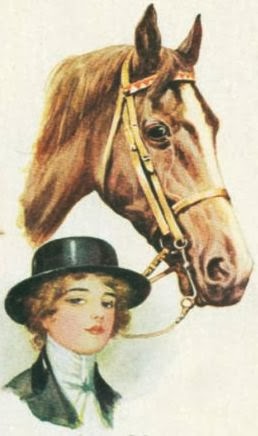 Certainly, the answer depends upon the sort of items one wishes to sell.

High-ticket items, such as driving carriages, saddles, and horse trailers may lend themselves to in-person inspection. Buyers want to kick tires. Horseback riders often insist upon trying saddles on their mounts before purchasing.

On the other hand, plenty of items do well online.

Fancy show chaps, dressage or hunt coats, showmanship outfits, and riding boots may be easily sold via internet auctions and listing sites – especially if shoppers have tried on similar items in-person already and know exactly what they want to purchase.

Horse blankets, saddle pads, spurs, and splint boots may be snatched up promptly that way, too.

Recently, I shared a table at a tack swap with a couple of friends. We hauled out all sorts of horsey gifts, riding equipment, and equestrian attire. 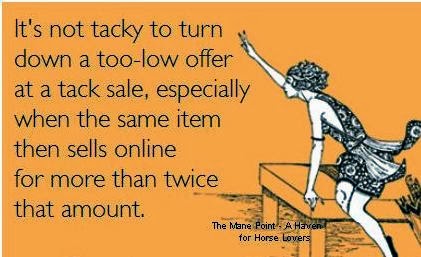 Towards the end of the show, a casual acquaintance tried on a pair of top-brand full-leather-seat riding breeches. She hemmed and hawed and finally offered a small fraction of the ticketed price..

I declined the offer. She began to whine.

I held my ground. “Sorry, but I paid more than twice the asking price for them. And they are nearly new,” I said.

She walked away, looking somewhat offended.

The interaction was somewhat uncomfortable. Because we sort of knew one another, it seemed this person expected an extra steep discount.

That night, I listed that pair of breeches on an online auction site, along with a few other higher-ticket items that failed to sell at the tack swap.

Well, whaddya know? The same fancy full-seat riding breeches fetched considerably more than my asking price at the tack sale – and a whole lot more than the apparently miffed shopper had been willing to offer.

Posted by LA Nickers at 1:47 PM No comments: 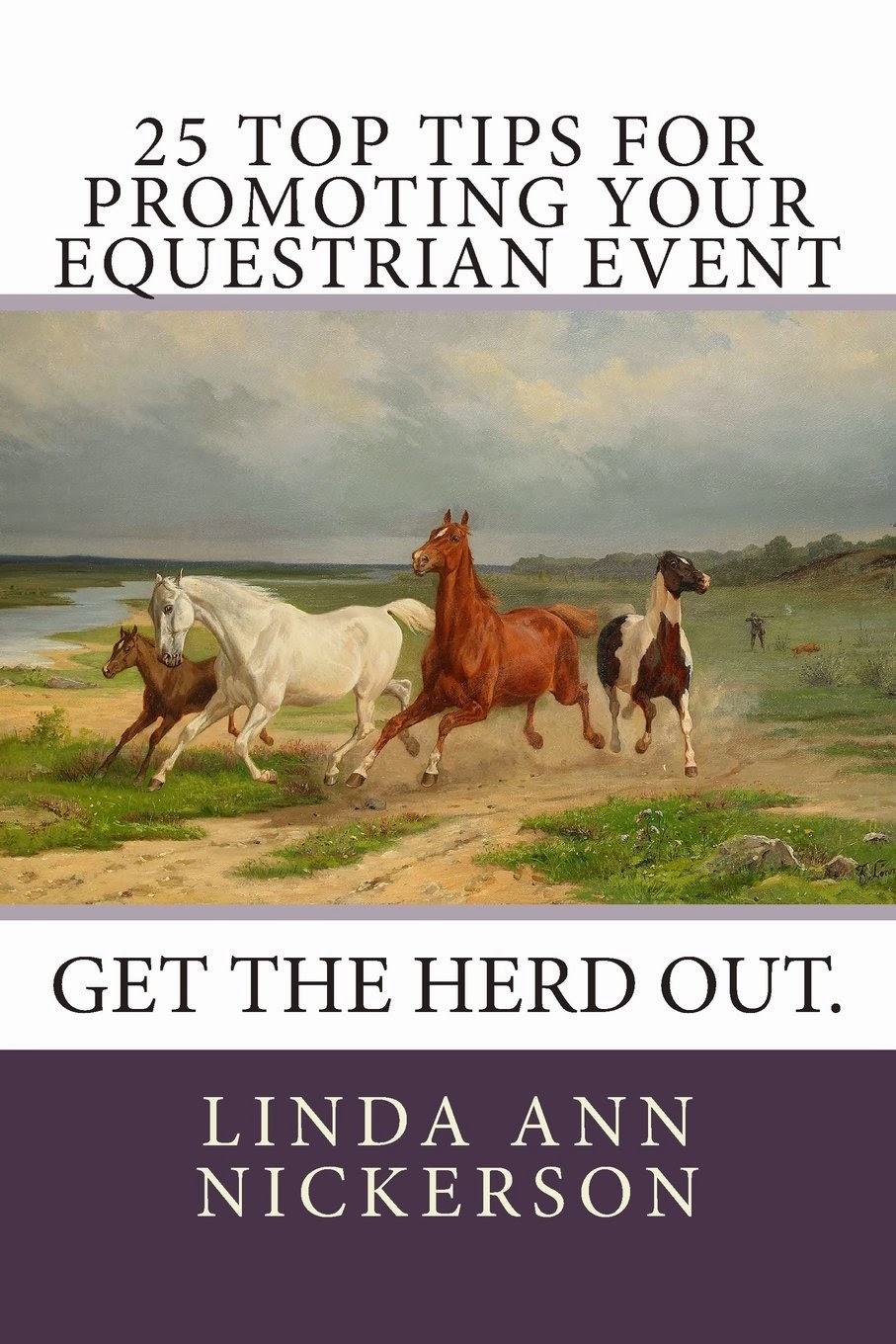 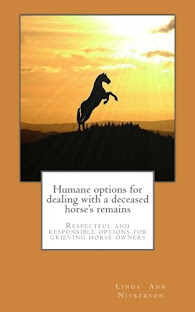 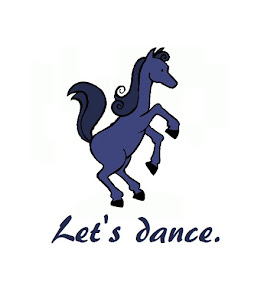 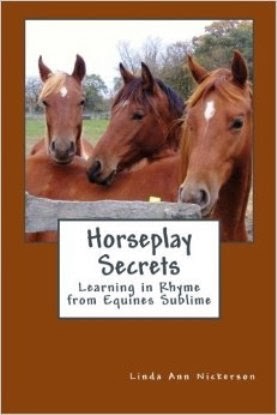 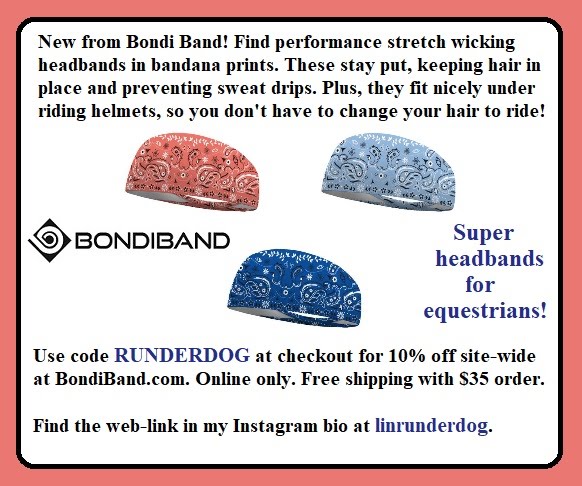 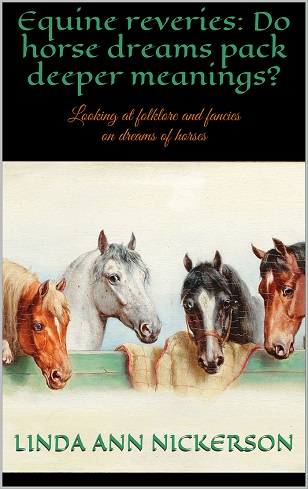